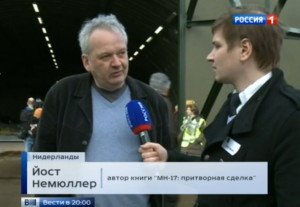 Niemoller is no layman. In October 2014, he published a book on the MH17 disaster whose title De Doofpotdeal (‘The Cover-Up Deal’) summarizes its key argument. The inside flap explains what the author means:

The Netherlands took charge of the investigation into the cause of the disaster, but agreed to grant a covert deal to Kiev. It thus became a pawn in an international political chess game. Unvarnished Cold War rhetoric is making a comeback.

Putin here is the ultimate bad guy. What he says is labeled as poisonous propaganda in the West. Meanwhile, it seems, all those concerned suffer from tunnel vision. Can we still be assured that the investigators do their work independently and objectively? 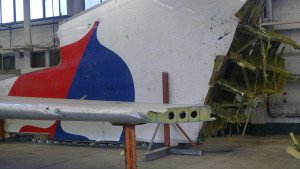 In his piece, Niemoller laments the shortcomings of the Dutch Safety Board, the body charged with conducting the investigations on the MH17 disaster. The ever-postponed deadline – the final report might be released at the end of the year, hence one and a half year after the crash, but that too is still uncertain – he finds perplexing:

When the co-operating countries of the JIT (Joint Investigation Team) intend to complete their probe is not known. Then, something gets leaked to the press: ‘By the end of this year’. With which legal framework? It is not yet known. Under which conditions? No idea. How will the co-operation between the Ukrainian authorities, the JIT and Dutch Safety Board unfold?

Everything is vague and secret. That is not the way it should be for such an important study.

Niemoller contrasts this with the approach taken by Moscow:

Russia proposed last year to conduct an international study based on research carried out by the UN – and not by means of a secret deal of countries, where one of the possible culprits, namely Ukraine, has veto power. 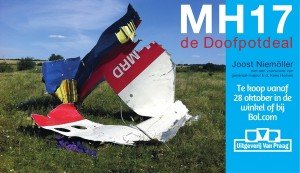 Niemoller, a Dutchman, laments the dubious role of his country, especially when considering that it was the one affected most by the MH17 tragedy: 193 of the 298 victims were Dutch. Niemoller says:

What we know for sure is that the Netherlands from day zero intensely cooperates with Kiev. What we know is that the Russians are kept out and that there is a blame game played against Putin.

Now Niemoller focuses his attention on the role Russia is about to play. He argues that Moscow holds all the cards, and that Kiev & co apparently hold none:

When the Russians said that if a BUK had been fired by the separatists, they would have certainly seen it on their radar, the Russians indicated that they know much more.

After a year, there is still no evidence on the table of that alleged separatist Buk on the table. Kindergarten-level work from Bellingcat has been dismissed. And there was no ‘Buk-track’ through the Donbas region.

Niemoller points out that Russia is not going to passively accept any result the Dutch Safety Board comes up with, especially if not backed with evidence. He reminds his readers that Russia has set up its own body, ready to refute any unfounded allegations against the separatists militias the JIT might bring forward:

The investigation Russia’s own Research Council is conducting will be a catastrophe for the Ukrainian and Dutch Safety Board.

Nor is Washington in a less awkward position:

The Americans are silent about possible Russian involvement. Even US hawk Victoria Nuland used very cautious language about MH17 during a recent press conference in Kiev. She showed she really has nothing more to say about it.

But it might get even more embarrassing for the US and its closest ally:

Meanwhile, an anonymous Russian report has appeared, suggesting that the Boeing flight MH17 might have been shot down with super-modern Israeli missiles. There is confirmation coming from an ex-CIA agent to a Ukrainian/Israeli oligarch on the availability to Ukraine of modern Israeli weaponry.

The same ex-CIA agent added that U.S. policy which is to blame for bringing down MH17 wants to push it away from the U.S. and will focus on local causes.

According to Niemoller, “This is a very sophisticated game, but Russia can wait.”

What this proposed, UN-backed MH17 tribunal boils down to is thus quite prosaic. “Faces should be saved. American faces especially. The Americans lost any initiative in diplomatic relations. It is the Russians who repeatedly state that they have an information advantage.”

The UN Security Council voting session on proposed tribunal to investigate last year’s Malaysia Airlines MH17 passenger plane crash in Ukraine is expected to be held next Wednesday [July 29]. Russia, which has veto power, is expected to reject the initiative.

Did you enjoy this article? Russia Insider depends on your donations: the more you give, the more we can do. Please consider making a donation. Go to the weblink above to dontate $25, $50, $100 or any other amount.

… Russia has objected to the formation of a tribunal, calling instead for the completion of an ongoing investigation, with conclusions expected in October.

[Russian UN Ambassador Vitaly] Churkin said he had not received definitive instructions from Moscow on how to vote next Wednesday but commented: “I have a very strong feeling that it’s not going to lead to a result that will be satisfactory for the Security Council.” He added: “We are against it.”

On July 21, 2014, the Security Council unanimously adopted a resolution [number 2166] demanding that those responsible “be held to account and that all states cooperate fully with efforts to establish accountability.”

Russia is pushing for a greater U.N. role in an investigation into what caused the downing of a passenger plane in eastern Ukraine after dismissing a proposal by Malaysia, Australia, the Netherlands, Belgium and Ukraine for a UN-backed tribunal.

Led by the Dutch, the countries are conducting a criminal inquiry into Malaysia Airlines flight MH17 and circulated a draft resolution to the U.N. Security Council earlier this month that would create a tribunal to prosecute those responsible. But Russian President Vladimir Putin has described the move as counterproductive and premature. Russia is a Security Council veto power and therefore could block the bid if it is put to a vote.

Russia has instead circulated its own rival draft U.N. resolution that would “demand that the perpetrators of the aerial incident be brought to justice.” The 15-member council discussed the rival draft resolutions on Monday.

New Zealand Ambassador Gerard van Bohemen, president of the council for July, said it was a “very positive discussion,” but noted that the key hurdle was the issue of a tribunal. “There was strong support in the room for the establishment of a tribunal. Russia of course has a different perspective on this,” he told reporters.

Russian U.N. Ambassador Vitaly Churkin said earlier that Moscow was opposed to an international tribunal because “we believe it’s not in the U.N. Charter, the U.N. Security Council is not supposed to deal with situations like that.”

When asked if Russia was against the tribunal proposal, Churkin said: “Yes.” Earlier this month he described the proposal as an attempt to organize a “grandiose, political show”…

The Russian U.N. draft, seen by Reuters, would request U.N. Secretary-General Ban Ki-moon to report to the council within two weeks on “the steps that would enhance the role of the United Nations in support of the (safety) investigation” and the appointment of a U.N. special envoy on the incident.

It also expresses concern that the ongoing safety investigation has been delayed and “does not ensure due transparency in its organization and work methods, which may have a negative impact on its outcome.”

Malaysia, Australia, the Netherlands, Belgium and Ukraine rejected on Monday the accusations in the Russian draft, saying that both the safety and criminal investigations were being carried out in line with the highest international standards.

“It is important for the Security Council to take clear and decisive action against those responsible for the downing of MH17 to send a clear message to the growing number of non-State actors with the ability to target civilian aircraft that such attacks will not be tolerated,” the statement said. Those countries hope to put their draft resolution to a vote this month, diplomats said.

“We are in the process of consultations. We have submitted our own draft resolution. We have convened a meeting for 15:00 in the afternoon to discuss it,” Churkin stressed.

He confirmed that Russia was against the idea of creating a tribunal to prosecute persons responsible for the MH17 crash as suggested by the Malaysian draft resolution, which classifies the crash as a threat to peace and security. Last week, Churkin said that the plane crash in Ukraine was a crime and posed no threat to international people and security.

The Malaysian Boeing-777 (MH17) crashed over Ukraine’s Donetsk region on July 17, 2014. The plane was on its way from Amsterdam, the Netherlands, to Kuala Lumpur in Malaysia. Fifteen crewmen and 283 passengers died.

According to the main version, the plane was shot down by a surface-to-air or an air-to-air missile. The Ukrainian government and the militias of the Donetsk People’s Republic (DPR) accused each other of what happened.

The Russian Foreign Ministry has repeated many times that it does not like how the investigation is being carried out.