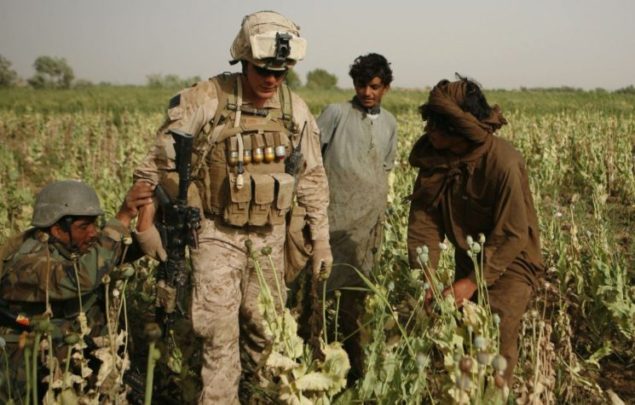 It is America’s longest overseas war and shows no clear sign of ending despite a shaky peace deal underway between the Trump administration and Taliban militants. A phased withdrawal of US troops from Afghanistan over the next year could yet be derailed, resulting in continued American military operations in the South Asian country – nearly two decades after President GW Bush launched Operation Enduring Freedom in October 2001.

It is America’s longest overseas war and shows no clear sign of ending despite a shaky peace deal underway between the Trump administration and Taliban militants. A phased withdrawal of US troops from Afghanistan over the next year could yet be derailed, resulting in continued American military operations in the South Asian country – nearly two decades after President GW Bush launched Operation Enduring Freedom in October 2001.

US involvement in Afghanistan is the archetypal quagmire. Hundreds of thousands killed or maimed, trillions of dollars wasted, a failed state – despite American pretensions of nation-building, and a militant insurgency stronger than ever. Washington’s declared strategic objectives in Afghanistan have never been coherent or convincing even among Pentagon top brass. The initial justification of “avenging terrorism of 9/11” sounds threadbare.

The irony is that Washington first got involved in Afghanistan back in the late 1970s to inflict a “Vietnam scenario” on Soviet troops who were defending an allied government in Kabul. The Mujahideen fighters sponsored by the US and their Taliban outgrowth have gone on to make the country an even worse Vietnam scenario for Washington than it intended for Moscow.

Afghanistan is known as the “Graveyard of Empires” where the British suffered a blow to their imperial prowess, like the Soviets and now the Americans. The question is: why are the Americans seemingly stuck in Afghanistan, unable to extricate their forces? Part of the reason no doubt stems from the bureaucracy of war and the reliable profits for the military-industrial complex which stifles a clean break from what is otherwise a futile, never-ending, dead-end conflict.

Another, perhaps more potent, reason is the immensely lucrative business of global narcotics trafficking. This may well be the main reason for why the Afghan war continues despite the patent incongruities and presidential vows to end it. It is a vital source of finance for the CIA and other US intelligence agencies. The big advantage from drug business is that the finances are off the books, and therefore not subject to Congressional oversight. That “dark” source of income allows American agencies to fund covert operations without ever being held to account by prying lawmakers (if the latter ever got around to it, that is.)

Senior Russian and Iranian officials have recently stated that US intelligence agencies are heavily involved in covertly transporting narcotics out of Afghanistan.

According to Eskandar Momeni, Iran’s chief of counter-narcotics, the production of heroin from poppy harvests in Afghanistan has increased year after year by 50-fold since the US forces invaded the country. “Based on reliable information, planes operated by NATO and the United States transport these illicit drugs in our neighboring country,” the official testified this week.

Russia’s presidential envoy to Afghanistan, Zamir Kabulov, is quoted as saying that CIA complicity in drug trafficking is “an open secret” in the country. “US intelligence officers… are involved in drug trafficking. Their planes from Kandahar, from Bagram [airfield near Kabul] are flying wherever they want to – to Germany, to Romania – without any inspections,” said Kabulov.

These claims put in perspective recent sensationalized US media reports which quote anonymous American intelligence sources alleging that Russian and Iranian military personnel were running “bounty-hunter” schemes in Afghanistan whereby Taliban militants were supposedly paid to kill American troops. The ropey US media reports had the hallmark of an intelligence psychological operation. Russia, Iran and the Taliban dismissed the allegations. Even the Pentagon and President Trump brushed the stories off as not credible.

But what the intended effect seems to have been is to scupper the hesitant moves by the Trump administration to wind down the Afghan war.

Afghanistan is the source for more than 90 per cent of the world’s heroin supply, much of it destined for Europe, according to the United Nations. Some estimates put international drug trafficking as one of the most lucratively traded commodities, on par with oil and gas. Financial proceeds can be laundered through big banks as the scandal involving British bank HSBC illustrated.

For the CIA and other US intelligence agencies, Afghanistan is a giant money press from illicit drug dealing. That easy source for covert funding makes the Afghan war too addictive to kick the habit. With its clandestine global network, fleets of private planes, diplomatic clearance, national security license and byzantine bank accounts all those features make the CIA a perfect conduit for narcotics trafficking. In addition to means, the agency also has powerful motive for secret funding of its other criminal enterprises: media influence operations, color revolutions, assassinations and regime-change subversions.

The systematic involvement of the CIA in international drug running is as old as the agency itself, created in 1947 at the beginning of the Cold War. Its function of covert operations is by definition illegal and therefore requires secret funding. The agency has been linked to illicit Nazi gold to fund its early operations. Later, narcotics trafficking entered as a crucial means for organizational funding. The Golden Triangle in Southeast Asia was central for sponsoring anti-communist schemes in the 1960 and 70s, as was Colombia and Central America for funding proxy forces like the Contra in Nicaragua during the 1980s. Afghanistan carries on this global function for underpinning the CIA’s criminal enterprises.