A new school year, and a new attempt at ceasefire, in Donbas and Ukraine 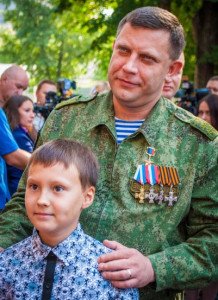 Today is the opening of the new school year across Ukraine and in the Donbas region in the east of the country. Notwithstanding the tragic riot of right-wing extremists in Kyiv the day before which killed three policemen and injured dozens more, this year’s school opening brings added hope–that the cease fire agreement of last week which takes effect today may hold, and that the governing regime in Ukraine may finally agree to meet and talk with representatives of the Donetsk and Lugansk people’s republics. Such direct talks are a condition of the comprehensive Minsk-2 ceasefire agreement of Feb. 12, 2015. Kyiv has yet to live up to it.

Today in Donetsk, Prime Minister Alexander Zakharchenko visited Donetsk Secondary School #4 to welcome students to their new school year on the Day of Knowledge.[1] He is a graduate of the school.

Zakharcheno told the first-year students at the school, “I want to congratulate you, my dear first-graders. You now start a new life. Today is the first day you will sit behind desks and meet new friends. I’m sure you will respect and obey your parents and teachers.

“Today you begin the road to adulthood. I wish that on your way, you shall never meet troubles or hardships, that you will always be smiling and happy. 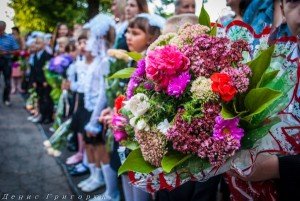 “Educators and teachers – your profession deserves honor and respect. Thanks to your work, we become responsible adults.”

The opening of the year at the school featured a traditional concert with songs and poetry by students for the newly arriving students and special guests. A feature of the event was a flashmob in which students of all classes joined hands and formed the shape of doves as symbols of peace. It was their way of saying that Donetsk does not want war.

Note:
[1] Dating from the Soviet era, September 1 is officially recognized in the former republics of the Soviet Union as the  ‘Day of Knowledge’. On that date, the school year is opened by various events, including greetings to the newly arriving first grade children, the ringing of the school bell by one of them, and delivery of the first lesson – the ‘Lesson of Peace’.

Secondary school in post Soviet countries unites primary school and high school students, aged 6 to 17, all in one building. In rural areas, there may be primary-aged school only, with older children traveling to larger centers for the higher grades.